On September 3, 1894, San Mateo was incorporated. A Board of Trustees was established to oversee the daily operations of the new city. The Trustees elected Peter C. Rogers to serve as the first Town Marshal. The Marshal assumed the duties as the chief law enforcement officer for the City of San Mateo. He collected business taxes and reported directly to the Board of Trustees. Constables and Night Watchmen provided police services under the supervision of the Marshal. Marshal Rogers served as Marshal until April 18, 1898. 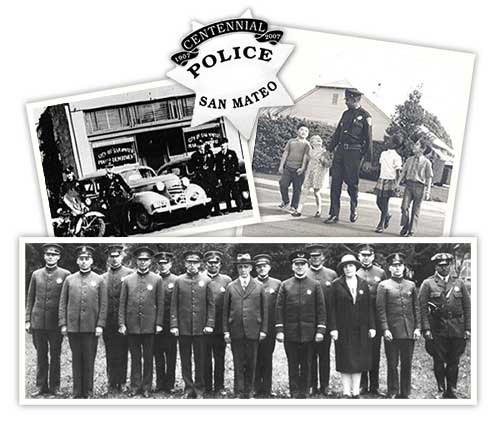 Five marshals served following Rogers. Their names and dates of service are as follows: In December 1906, during Boland’s term of office, the Board of Trustees realized that the City of had grown to the point where a police department was necessary. On December 24, 1906, the trustees passed a resolution and Ordinance #117 was adopted, thereby creating a three person police department. On January 1, 1907, the San Mateo Police Department was established and the first police officer, Thomas Tyndall, was hired. On January 28, 1907, John J. Friel was hired as our second police officer. Eleven months later, Ernest Ross was appointed as ’s third police officer. A question arose early in our history of who was our first police chief? The San Mateo Times and Leader newspapers and the Board of Trustees often referred to Marshal Boland, Marshal McComb, and Marshal Burke as "Police Chief." Descendants of these three men believe their relative was the first police chief. So, who was our first police chief? City trustee minutes show that Boland, McComb, and Burke were appointed as Marshals. The 1922 minutes made reference to the "Marshal’s Report." In April 1923, the City of became a charter city. A city manager was appointed, and the marshal became a police chief. All three men performed the job as a police chief; however, Thomas Burke was our first chief. Thomas Burke died in office on January 27, 1944.

Contact Us with Your Stories
The San Mateo Police Historical Project is ongoing. Anyone with information about former officers, memorabilia, photographs, and stories is encouraged to contact us. Send an email to the police department at police@cityofsanmateo.org or send mail to 200 Franklin Parkway,
[]