To see the progress in your neighborhood, click here to view the new TAP Map. 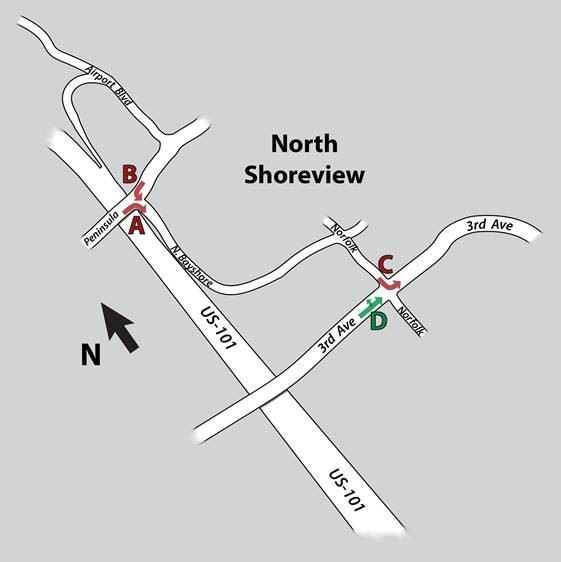 The City of San Mateo will begin a pilot project on Monday, April 30 aimed at deterring cut-through traffic in the North Shoreview neighborhood during the evening peak commute hours. The pilot project was developed through a collaboration with residents on the North Shoreview Traffic Forum Steering Committee and was presented to the North Shoreview Homeowner's Association on March 29th.The project consists of several measures, at both the Peninsula/Bayshore and 3rd/Norfolk intersections, aiming to discourage cut-through traffic from entering the neighborhood while optimizing the preferred route on 3rd Avenue. At the Peninsula and Bayshore intersection, a "No Right Turn on Red" will be installed for the eastbound right-turn movement. Additionally, the westbound left-turn signal timing at that intersection will be reduced. On 3rd Avenue, the traffic signals will be synchronized and additional green light time will be given to the eastbound left-turn signal time will be increased to provide additional time for residents to get into North Shoreview.The pilot project will be in place for 60 days. During the first 30 days, the San Mateo Police Department will issue warnings. Citations will be issued after that time. Also during this time, "after" studies will be conducted to determine the effectiveness of the pilot project. City staff will ensure the after study occurs while school is still in session.