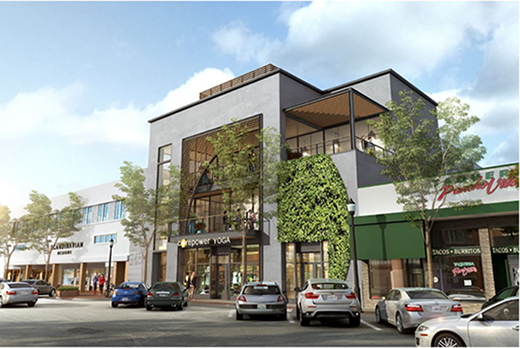 
The project is currently under construction.

The Planning Application was filed on October 28, 2016. The project design and plans were revised several times during the roughly 6-month period between when the application was submitted and when it was deemed complete. From March 27 to April 6th, a public notice of the Pending Zoning Administrator Decision soliciting public comments was mailed to approximately 538 property owners, residents and interested parties in the City, and the public notice was posted on the project site. Staff reviewed, evaluated and responded to comments received from the public on the planning application during the 10-day comment period and staff found that the project was in compliance with all applicable City planning documents and the Zoning Code. This planning application was approved by the Zoning Administrator on April 17, 2017 and during the 10-day appeal period, a City Planning Commissioner requested on April 25, 2017 that the planning application approval for the project be reviewed by the Planning Commission. This request was made pursuant to Municipal Code Section 27.08.090 Appeals.

Site Plan and Architectural Review (SPAR) for an interior addition and façade improvements to an existing commercial building with a new third floor consisting of 7,034 square feet of new office floor area primarily within the existing building envelope. The exterior façade improvements include changes to the wall configurations, three new covered balconies facing B Street and a green plant based material wall. The developer is required to pay an in-lieu parking fee as specified in the City’s Zoning Code, Chapter 27.64.100 Parking Assessment and Special Districts. For this project, the required fee is calculated as 19 stalls based on the additional 7,034 square feet of general office space. The parking in-lieu fee payment is currently $18,000, based on the current rate in the City’s Comprehensive Fee Schedule. The project conforms with the City of San Mateo Zoning Code, General Plan, Downtown Area Plan and Downtown Retail Core Design Guidelines.
[]