Background:
The City has committed to developing Borel Park as part of the proposed Fire Station 25 relocation project.The new fire station is planned to be located on the southeast corner of Borel Avenue and Shafter Street. The balance of the site will become the developed 1.1 acre Borel Park.

On February 21, 2018 a neighborhood meeting was held to present preliminary design concepts for Borel Park. Designs were prepared by David Volz Design, Landscape Architecture based on comments received from the neighbors at meetings held in October of 2016. Comments about the design were received and documented by the city staff. 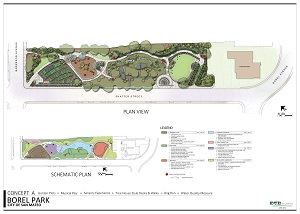 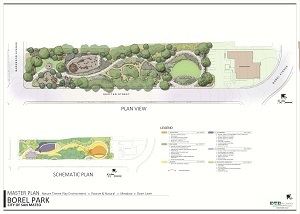 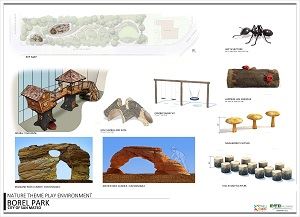 The Parks and Recreation Department is accepting additional comments on the three design options. An application has been made for a Land and Water Conservation Fund Grant. Grant award notification will not occur until June 2018 so until then the budget for the project has not been determined. The final plan will be prepared based on neighborhood comments and the available project budget.

June 2018 - Update
The City was not chosen as one of the recipients of the Land and Water Conservation Fund Grant.

July 2018 - Update
Three concepts were presented to the Park and Recreation Commission meeting on July 11, 2018.  After public input and Commissioner comments it was decided to go with the Master Plan version presented that evening (see design above).

May 2019 - Update
Professional Design Services contract was awarded to David Volz Design at the May 20th City Council meeting.