Mayor Rick Bonilla was born in San Francisco and grew up on the peninsula. He and his wife have resided in San Mateo since 1991. Rick was appointed to the City Council in January 2015, elected in November 2015 to a two-year term, and re-elected in 2017 to his first full term. Rick served as the Chair of San Mateo's Planning Commission, and also served six years on the Public Works Commission and several years on the Bay Meadows and Transportation Corridor Citizen's Advisory Committee (2001-04). 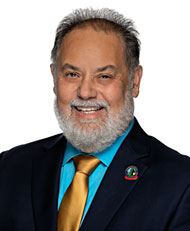